Words have multiple definitions until they are used in a sentence which narrows the possibilities. MindNet deduced the intended definition of a word by combing through the networks of the other words in the sentence, looking for overlap. Consider the sentence, “The driver struck the ball.” To figure out the intended meaning of “driver,” MindNet followed the network to the definition for “golf” which includes the word “ball.” So driver means a kind of golf club. Or does it? Maybe the sentence means a car crashed into a group of people at a party. 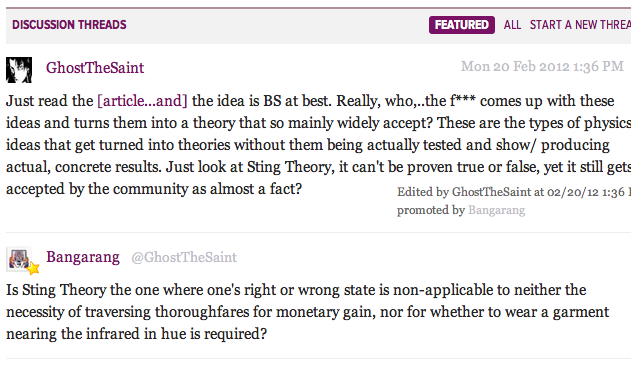 Man bør ha minimum lyse-blått belte i nerd for å ta denne her. Hint: You don´t have to put on the red light…

The stupor of alcohol, like the haze of the early morning, makes it harder for us to ignore those unlikely thoughts and remote associations that are such important elements of the imagination.

So the next time you are in need of insight, avoid caffeine and concentration. Don’t chain yourself to your desk. Instead, set the alarm a few minutes early and wallow in your groggy thoughts. And if that doesn’t work, chug a beer.

Why Being Sleepy and Drunk Are Great for Creativity | Wired Science | Wired.com

Hal Blaine, who justifiably calls himself “10 of Your Favorite Drummers” on his Web site and played his drums at the bottom of an elevator shaft for Simon and Garfunkel’s “Boxer,” claims to have to come up with the Wrecking Crew’s name.

Musicians like Mr. Blaine showed up in Los Angeles in the early 1960s, were put on the map by Phil Spector (Mr. Blaine plays the ace drumbeats that kick off “Be My Baby”), were appropriated by Brian Wilson for the Beach Boys’ “Pet Sounds” and became hotly in demand.

Old-school session players complained that these guys (and one woman, Carol Kaye, who played guitar as a stealth Beach Girl) were wrecking the business for everyone else.